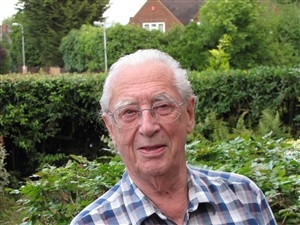 [Dick recalls the famous planes and pilots, and all the different jobs done at the de Havilland site in the 1930s….. including the splicers who worked on the steel cables which operated aircraft controls.]

For some reason all the splicers were Welsh miners who’d come to Hatfield as they’d lost their jobs. A lot of the fitting shop workers were from Swindon because the railway works had closed down. So there was the Swindon Mob and the Welsh Mob…and then there were a lot of Glaswegians…in the ’30s of course there was the Depression and a lot of Glaswegians came down. I still use a lot of the expressions I learned through working with them!

All of a sudden de Havilland had to get a lot of skilled workers and they must have advertised countrywide. They’d built this factory that needed a couple of thousand workers and they couldn’t get them from this local area. Even if there were people around here that wanted work, they wouldn’t have been able to do the particular sort of work to the standard that was required.

About six different types of aeroplane were being made at that time…Tiger Moth, Queen Bee (a radio-controlled Tiger Moth), Hornet Moth, Leopard Moth, Puss Moth and the Dragon Rapide….all being made at the same time. There was a realisation in the country that flying was the thing…there was the thought that everyone would have a plane in their back garden and that they would fly to work!

There were aviators like Amy Johnson, Jim Mollison, Jean Batten…all trying to break records. There was Lindbergh flying the Atlantic…my mother woke me up to tell me “He’s arrived…he’s done it!!”. I must have been about eight at the time. So flying was the thing in the papers…and I think de Havilland got in on the crest of the wave. They made the first aircraft, the Gipsy Moth, which you could wheel about, tow behind the car, fold the wings….and it was at a price that a lot of people could afford.

All the big records

The Gipsy Moth was such a success. Francis Chichester flew one to Australia. Amy Johnson flew one…all the big time records were with de Havilland planes. At that time the company moved from Edgware to Hatfield and decided it could expand.

I saw Amy Johnson and Jim Mollison look round the factory once before they were married. He had a fur-lined flying coat because in those days with the open cockpit aeroplanes the pilots wore heavy leather coats. Amy Johnson looked like a typical 1920s flapper that you see in cartoons…with a long coat fur-trimmed down the bottom. She looked such an ordinary woman. You’d never have guessed she could have flown as she did.

I saw the Mollisons flying the old-type Comet into Hatfield – the DH 88. They landed from an unusual direction. Most pilots landed from the direction of Manor Road…from the direction where Tesco is now, because the prevailing wind was from the south-west. But the Mollisons came in from over Astwick Manor [with the wind behind them]. And it looked as though they were going to land at a colossal speed for those days. All of a sudden the plane disappeared. And everyone said “It’s crashed!”. But what we didn’t realise was that there was this great dip in the middle of the aerodrome [runway], probably filled in in later years. So they were still flying but went out of sight. Then all of a sudden they reappeared. They had ever such a job to land the plane….it was wobbling from side to side.

90 year old Dick Whittingham began his engineering apprenticeship at de Havilland in 1935. He then became an Inspector, moving in 1942 to the Experimental Department where he signed new aircraft out for flight .

Dick’s sound clip recalls women who were employed as welders at the site…their skills were much in demand, not least when workers like Dick needed a welding job done in a hurry to meet a deadline.

Dick’s memories have been recorded as part of an oral history project by the University of Hertfordshire to collect reminiscences of de Havilland.