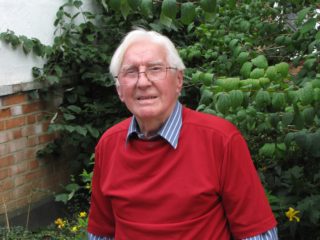 [Arthur worked as a sheet-metal worker in the experimental department at de Havillands where new aircraft were being created.]

I’ll never forget coming to de Havillands from the shipyards and the motor car industry…you had soap when you went to wash your hands. You had soap! You’d go to the loo in the shipyard, all there was was a trough and a plank along the top with running water…no soap. [At de Havillands] if I went over to the sports club, I could get a shower. I’d never been in a shower before. So it was marvellous to me.

People like Sir Geoffrey de Havilland had his own group of people, perhaps half a dozen or less, that he was doing his own experiments with. Occasionally I’d get work to do for him. You’d know it was for Sir Geoffrey, you know. But you didn’t care. I was just doing a job. You’ve go to remember, I wasn’t  a sophisticated bloke, I was just making things and getting them past the inspector. I just wanted to get out as soon as I could…get my wages.

I was in the 94 Shop, where they built the DH 94, which was a small aircraft. But we didn’t have anything to do with that…there were ‘tin bashers’ like me all over the place.

Whatever you were making, sheet metal would be put into a mould – an egg-cup shape, say. They got a bit of metal and laid it in there as best as they could, as if it was paper. A big hammer would come down and hit it…and it would come out as some shape. But it would be full of wrinkles…not the finished shape required. So it would come to us. By this time someone would have made a wood frame of whatever shape was wanted. And you’d have to make that metal which had come out of the drop hammer shop into that shape…if it meant cutting it or welding it or bashing it, that’s what you did.

The most skilled job

The most skilled job in the tin bashers’ shop was to get a flat piece of metal and run it between two rollers and you would pull it backwards and forwards, stretching it. If it was a really long piece of metal you’d have two tin bashers, one at either end, pushing it and pulling it backwards and forwards, trying to get the shape. You had no machinery, except these two wheels. That’s where the real skill came in.

On September 3rd 1939, I went to Whitehall to join the navy. My younger brother had joined the army…and I thought I ought to do something. I didn’t want to go in the army, because I’d seen pictures and read rather a lot about squaddies. I didn’t want to join the air force because I’d done my stint in aeroplanes! So I thought I’d get in the navy because my family were seafaring people.

So I went up to the man behind the counter, and he said, “Where are you working?”. I said I was working at de Havillands. He knew the name, didn’t he? He said “What do you do?”. So I told him. And he said, “Oh, you’d better go back…you’ve got to make aeroplanes”. So I came back, not feeling very happy.  I didn’t get called up until 1943. I still feel that I ought  to show my children and grandchildren I tried to join the navy in 1939 and they wouldn’t let me.

Arthur Bal came to Hatfield to work at de Havilland in the late 1930s after working as a sheet metal worker in the shipyards in Grimsby and the car industry in the Midlands. His sound-clip recalls the sole bombing of the Hatfield site during the Second World War – wreaking devastation on ’94 Shop’, where Arthur worked.