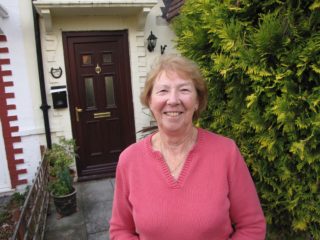 I started work at de Havilland because of the Hatfield tunnel! I had worked at a little newsagents down the road, part-time, because my children were still at school. When we knew the tunnel was going to be built, all these businesses had to close down.

Do we need staff?

So when I was made redundant I said to my husband, “Is there anything over there at de Havilland?”… and he said, “I think they might want some staff.”   So I just rang up and said, “I understand you might need clerical staff.” This lovely guy said, “Do we?” And I said, “Well, I don’t know, do you?” And he said, “Well, you’d better come for an interview this afternoon.” As quick as that. And I went, and I got the job.

I worked in a department called ‘Customer Support’. My area was ‘Unit Exchange’. That meant that customers could make contact and ask for parts for their aircraft [usually 125s] that were malfunctioning in some way. We would supply a reconditioned part in exchange for theirs…which they would send in to us and we would send off to get repaired. And it would go back into the pool and be circulated again and again.

There were two types of status for enquiries. One was AOG – ‘Aircraft On Ground’. That meant that it was a very very urgent requirement, because an aircraft on the ground isn’t making money. The other status was COR, ‘Critical Operational Requirement’, which was not quite as urgent, but still urgent.

Oh Gosh – all over the place!

People would telex in, then later it was faxes…but if it was really, really urgent it would be a phone call from anywhere in the world. They would say it was an AOG or a COR. It might be a company at Heathrow, or the RAF, which had military versions of the 125….but a lot of parts went overseas – a lot to America, but also Saudi Arabia, Nigeria, Australia, Kuwait…Oh, gosh, all over the place!

We had to do the paperwork. We had visual display units, not an actual computer. We’d look up and see if we’d got stock. If we hadn’t and it was a very urgent case, then everybody had to move….and I mean move !!!…to find a part.  If we did have the part, though, it was located, and the paperwork went to the stores. The store-man would go along the racks and find the unit with the appropriate serial number. It would then get picked up, the paperwork was completed and the part would be on its way, often via Heathrow.

Barbara Latham worked on the de Havilland site for the successor company British Aerospace, from the late 1970s. Her husband Don worked there before her. The sound clip contains memories of social occasions she went to at the site before she joined BA.

Barbara’s memories have been collected as part of an oral history project led by Andrew Green at the University of Hertfordshire.