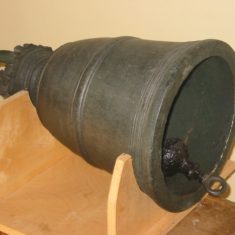 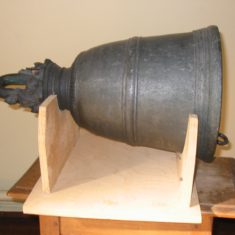 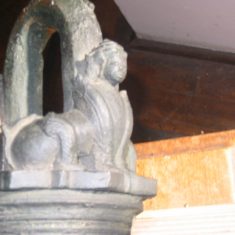 The bell was given to St Michael and All Angels Church by the Misses Caesar, sometime members of the Congregation. How the sisters came into possession of it remains a mystery.

In 1999, two Buddhist nuns from the Buddhist Monastery of Amaravati near Great Gaddesden were invited to come and see if they agreed that the Bell was Burmese. They confirmed its origin and gave a translation of the inscription. It reads in two different Burmese variants:  “This bell was donated to the Venerable Lake Pya Kan in the year 1183 (Burmese Time),(1820 Our Time) , by Saya (Teacher) Man Ywa Mawy from the township of Pegu, for the purpose of attaining Nirvana.

The weight of the bell is 50lbs”

On the top of the bell are two Buddha likehuman heads, and the bodies of lions. These are apparently ‘Devas’, heavenly beings, who can manifest themselves in either animal or human form.The Buddhist Nuns stated that these particular images are of the King of Devas. They are placed on the top of the bell for its blessing and protection.

The bell is not cracked and seems in good order.The flat note is simply the way Burmese bells are made.

click on the MP3 File to listen to the bell