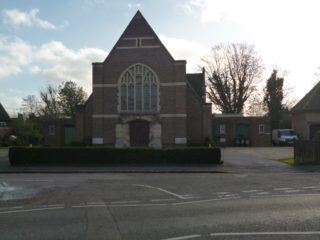 Originally conceived in 1929 building was completed in 1932, as successor to the Park Street Chapel when Hatfield Newtown was expanding and was known at that time as the Congregational Church of Hatfield.

A Manse for the Minister was built in 1935 but in 1944 both Church and Manse were badly damaged by a flying bomb which destroyed both St Audrey’s School and the Police houses.