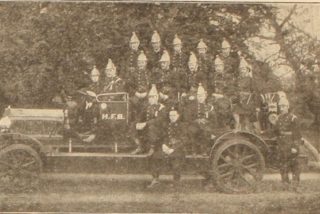 This picture appeared in The Pilot newspaper on 19 October 1923, page 5, along with the following poem.

The Councillors at Hatfield
Are trobled in their mind,
The captain of the Fire Brigade
Has recently resigned
The Fire Brigade committee
Has tried to fill the place,
But find their nomination
Does not meet the case.
The Firemen had voted
For one among their ranks.
But, said a weighty Councillor,
We must decline with thanks
I move that this said Council
The question do sen back,
And place the said committee
Once more upon the rack.
And now there’s surely needed
A solomon most wise,
Who’ll clearly show the Council
’twere best to advertise.
P.P.P.

The names of the crew are as follows: