You are here: Home>New contributions>Dennis Brain (a famous musician) and Hatfield 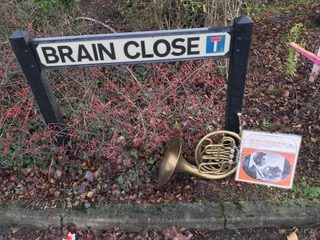 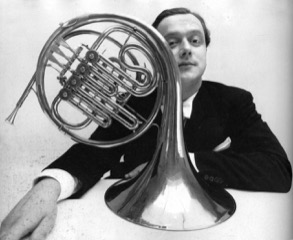 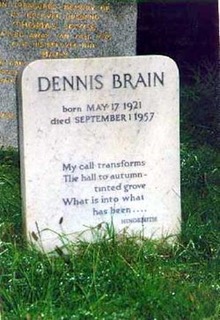 Not far from Old French Horn Lane in Hatfield is Brain Close. An uncommon street name, but one that has a connection.

Whereas Old French Horn Lane is thought to have been named after a pub, Brain Close remembers one of this country’s greatest-ever musicians.

In the 1940s and 50s, Dennis Brain single handedly turned the French Horn from being a rather unreliable member of classical music’s brass section into a solo, virtuosic instrument. Based on his orchestral performances and recitals, international composers flocked to write for him. He tackled whatever they threw his way and inspired other horn players to step-up and follow in his wake.

Alas his glittering career came to an untimely end. At six in the morning on 1 September 1957 he crashed into an oak tree on the Barnet By-Pass. It was outside Hatfield’s De Havilland Aircraft factory, near to The Stonehouse pub. He was only 36.

Brain had driven through the night from the Edinburgh Festival to get home to his young family in Hampstead. The weather was poor and some blame a disconnecting prop shaft in his Triumph TR2. However he was also known to drive fast. [His obsession with cars meant he often had car magazines on his stand, instead of the sheet music.]

His death caused dismay in the world of classical music. No applause was requested at a performance of Tchaikovsky’s Pathetique symphony, which had been the last piece he played. He is buried in Hampstead Cemetery.