Sowing & planting in the 11th century 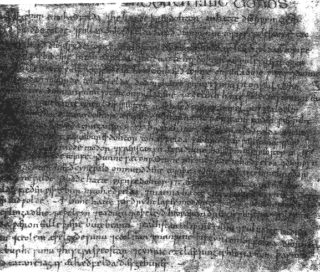 The fragment of manuscript from Ely describing the serfs of Hatfield, their jobs and marriages, beginning " dudda waes gebur into Haedfelda"

The following is an excerpt from Michael Wood’s book “Doomsday”  which accompanied the BBC’s TV series of the same name.

The book is a fascinating account of English life, both before and after 1086 when the Doomsday survey was carried out.  What follows is an account of the people who were living & working in Hatfield a century before Doomsday.
Labour services were the way of life for the mass of people across Europe for centuries during the so-called Dark Ages and the feudal era. Several management efficiency texts exist from this period, showing how the stewards of royal estates were expected to maintain high standards of economy and ‘neatness’. Most famous is the ninth-century Frankish text De Villis, but comparable sets of estate memoranda survive from Anglo-Saxon England which show how thoroughly these ideas had been imbibed by the English ruling class. Here is an example from a management text entered into a volume of Anglo-Saxon law:

The gebur’s [villein’sI duties vary; in some places they are heavy, in others moderate. On some estates it is such that he must perform such work as he is told for two weekdays each week throughout the year, and three weekdays at harvest time, and three from Candlemas to Easter; if he performs cartage he need not work while his horse is out. At Michaelmas he must pay ten pence tax, and at Martinmas twenty-three sesters of barley and two hens: at Easter one young sheep or twopence. And from the time when they first plough until Martinmas he must plough one acre (of his lord’s land) each week and prepare the seed in the lord’s barn himself. . . When death befalls him, his lord is to take charge of what he leaves.

This account, of c.980, which is given in full, appears in a detached leaf of a lost book from the abbey of Ely.